The tougher the challenge the sweeter the victory. 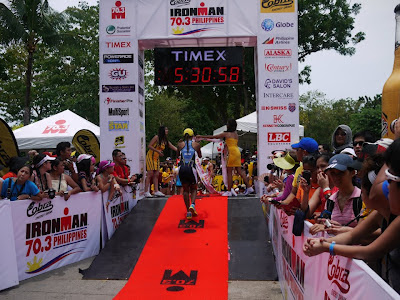 If the event informal slogan was "EAT THE PAIN", this year's race was a BUFFET!

The 4th installment of the Cobra Ironman 70.3 in Cebu was clearly the TOUGHEST triathlon staged here in the Philippines. A sufferfest on all levels. Unlike the swim in Camsur's CWC man-made lake, the swim in Mactan Shangri-la's Ocean front though luxuriously beautiful, hid the tough challenge of battling against a strong current for at least half of the swim. The seemingly flat and easy bike course which everyone looked forward to, turned to be a challenge even to the most powerful cyclists. Strong gusts of winds for at least 25% of the course ambushed the triathletes quite unexpectedly in the long stretch in the "M" loop each time after exiting the thrilling ride inside the tunnel leading to Talisay. Experts say that riding against the wind is like doing climbs without the hills. You need to easy up on the gears. I'm certain very few did so. I surely didn't. I kept pushing and fighting the head wind. And the run....the run....that extremely painful run. I can imaging loving running the course given the charming countryside appeal along some parts, highend housing in other parts and of course, the seaside run in Punta Enganeo. But doing the run in the 10am to 12nn microwave oven heat?! Napaka-sakit, Kuya Guy! It also hurt extra because I spent all my run legs fighting the wind in the bike course.
﻿


Oh, and the psychologically torturing "extended finish line". I thought the tri gods were playing mind tricks on me and kept moving the finish line. I decided to give whatever energy I had left when I saw the sign that said "18km". The zigzagging maze to get to the finish was extreme punishment. I was glad to finally see the ark. And there stood Ernie Lopez, Senator Pia Cayetano and my favorite voice in the world, the Ironman announcer (ano pangalan nya ulit?) waiting like angels welcoming me into paradise. Well, after doing a 70.3 that tough, Sir Ernie does look like a cherub.

But this is why we love this sport. Being able to push ourselves to the limit under the most extreme situations and survive it. Suffer 5 to 7 hours or so but be able to brag for the rest of our lives.

Anyone who finished Ironman 70.3 Cebu , whether in 4 hours and change or 8 hours and 29 minutes can be proud of their accomplishment. True Tri Warriors given the difficult course, the heat and the fact that water ran out in the run course for those who negotiated the race in over 6 hours.

Big Thanks and Congratulations to Fred Uytengsu, Guy Concepcion, Princess Galura and the rest of the Sunrise Team who outdid themselves for this event. A perfect venue, a tough but safe course, worldclass logistics and a truly international level sporting event in terms of the Expo, the pre and post events, the race briefing and even the mass on Saturday night. Thank you as well to the Cebu Provincial Government and Tourism Authority for opening up your beautiful city, closing out the traffic and brining out the warm audience to support the tri community.

The Mactan Shangri la served as the epicenter of the 4th chapter of the Cobra Ironman 70.3 here in the Philippines. This laid back and very luxurious, sprawling hotel turned nuclear with energy on the weekend of August 3rd to the 5th. Over 1,400++ triathletes from 20+ countries plus their families, sponsors, friends and supporters decended on the hotel for the event. 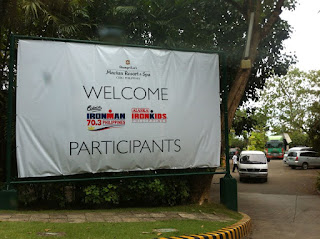 Everyone and anyone into tri were probably in attendance either as athletes or just to witness this monumental event. The race was sold out fast when it opened for registration several months back. The lure of coming to the country's number 1 tourist destination that is Cebu to do our favorite sport and an Ironman 70.3 at that was irrestistable.

You could see the excitement as early as the airport in Manila. You'd think it was a tri convention center with so many tri cases being lugged by the familiar faces in the sport. The airport was ready for us as ground staff for the airline and the airport were extra friendly and supportive. Wow, Princess and here crew thought of everything.

I settled in at the Cinnabon for a treat after checking in. Here I see Matanglawin himself, Kim Atienza with his family. I really love this sport. To think Kuya Kim just went through a health episode a couple of years ago and here he is, all slim, fit and Ironman 70.3 ready. He did so well, he finished way ahead of me despite my 6 year headstart on him in triathlon.


Transporting the bike cases was no sweat as the receiving airport in Cebu was well organized as well. Like a production line, the ground crew moved our stuff from carousel carts onto transport vehicles and into our hotels in less than 45 minutes. The presence of Sinulog dancers was an extra treat that gave the event a truly Cebuano stamp! 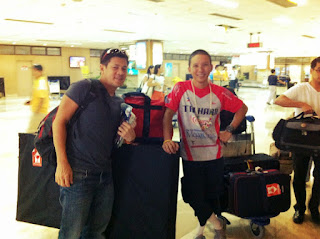 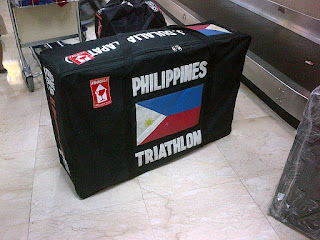 The Shangri La Mactan was a luxurious as ever. During my 20 years working for multinational companies, this hotel was a frequent venue for meetings. We hosted the Asia Pacific boss of Johnson & Johnson in this wonderful hotel and to this day, he talks about his most pleasant memory of the Philippines at the Shang Mactan.


As usual, the registration was both a thrill and so efficient. I always feel so hardcore to be among all the athletes and when I receive the bag containing all the race stuff. The free Cobra, Alaska Milk and Century Tuna products (this time, high end Bangus) is always a welcome treat. 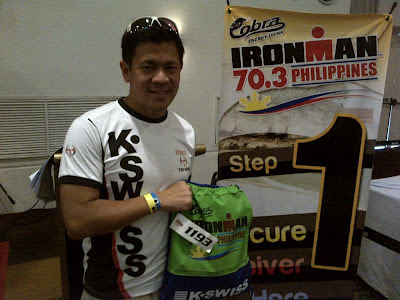 I mixed a little business with the pleasure of racing by going out to see supermarkets to check out the quality of our presence in this very strategically important market. All is well. Century brands have good distribution and are displayed well.


The part I always look forward to is the race briefing. Here you see all your friends and all the teams in their nice t-shirts, jackets, uniforms. The race briefing adopted the use of a video originally done in the last Century Tuna 5i50 Triathlon to show athletes the race course. It was followed by a surprise inspiring video on Ironman 70.3 Philippines defending champion and Ironman World Championship runner up, Pete Jacobs plus an inspiring speech from Pete. Here, we are introduced to the phrase "Eat the Pain" which is what powered Pete Jacobs in his duel with Realert from Germany for the 2nd place finish in Kona. 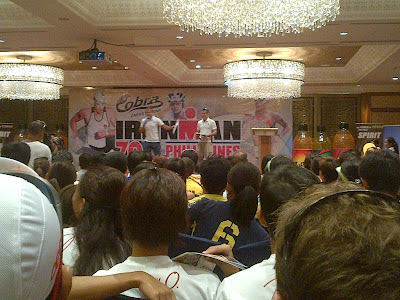 On race day, the Shang Mactan served breakfast as early as 3:30 am to accomodate the practice of triathletes of eating 2 hours before race start.


We then got ready for the very brutal day ahead. Body marking was fast and once again efficient and soon the beach was packed with triathletes from many parts of the world. There was a big Fil-am contingent and a sprinkling of Japanese, Chinese Hong Kong, Singaporean, Australian, Malaysian, Thai and a few European athletes. One of the most sought after faces was of Jensen Button, the Formula 1 Champion and age group triathlete. Also present were several celebrities from the local showbiz and news industry. Basta ako, Papa Piolo forever!

The race was a water start which adds to the prestige and "astig" factor. Feeling Kona!. Despite the over 900 athletes in wave 1, I was surprised by the very little banging I got in the swim. I had a clear path for most of the way probably because I avoided the bouys and that the Ocean provided more swim space for everyone. I felt a strong current swimming away from the Shang but this was compensated for by the strong tail current coming back to the beach towards the finish. My swim was 20% faster than usual.


I get out of the water at the same time as eventual age group podium finisher, Don Velasco and my teammate, Raymond Ordoveza who are both better swimmers than I am. Maybe all the swim training helped. Both guys however power through the bike as early as km 8 and I soon lose sight of both. I ride with a pack composed of Maxi Abad of Polo Tri, Kuya Kim Atienza, some guys from Fil-Am Tri, Tri Clark and PLDT. My mistake was to keep pushing to achieve my target average speed even during the strong head winds. I would pay for this dearly after the bike ride. A rookie mistake by a 6 year tri veteran.

At transition 2, I knew my race was in bad shape as soon as I got of my bike. My legs were mush. I enjoyed the ride too much that I spent all my legs along with it.

I shuffled and walked the run portion of the race. I decided to "Eat the Pain" and keep moving forward. Taking water showers wherever I could get it to bring down my core body temperature. I got to talk to everyone else who was suffering along the course and we all give each other encouragement. Seeing everyone - both veteran and newbie - warrior on inspired me.

I also kept going despite all the pain because I knew my 87 year old Dad was at the finish line. He used to watch my brothers and I in all our major races in our youth. We were runners who dominated the track especially in our teen and college days. It's been 28 years since he's seen me race and he thought I could still race at the level he remembered me doing in my youth. That's why he went to the finish line as early as 8am. I crossed the finisher's arch at 12noon plus change. But it was indeed rewarding to see him smile his big smile when I crossed the finish. I had earlier dedicated the race to him and my mom who is celebrating her 85th birthday in a few days.

So many heroic and inspiring stories were written that day. Everyone was indeed a winner whether on the course or when they got home.

It is said that it takes3 weeks for the immune system to recover from a 70.3 Ironman. Load up on the vitamins and rest. Enjoy life with a low training load. Off season began yesterday.

On a sad note, one of our Tri Brothers passed away during the race. Ramon Igana, Jr., an employee of Cebu Pacific and registered in the relay suffered what the organizers says was a Pulmunary Embolism during the bike portion of the race. Let us all pray for the repose of his soul and the well being of his family. The added sadness to the tragedy was that his wife, an ultramarathoner, was his relay partner waiting for him in the run.

Let's all stay healthy and safe.